NewsZS Selected to Perform B...

Construction is underway on 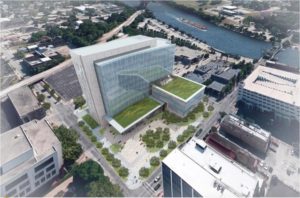 Will County’s new courthouse and justice center in downtown Joliet, Illinois. The building is a 10-story, $215 million project designed by Chicago-based architecture firm Wight & Company. Gilbane is the Construction Manager for the Project.  The new 369,000-square-foot structure includes a curtain wall facade and large landscaped plaza to convey openness and transparency. The new building will replace the current four-story brutalist facility across the street.

Topped by an extensive green roof, the facility will include 38 modern courtrooms to hear criminal, civil, and family law cases. Offices of the Will County circuit court clerk, state’s attorney, and public defenders will be housed in the new structure.