ZS is proud to be an integral part of the moving of the Milwaukee Symphony Orchestra’s Warner Grand Theater historic wall on the east elevation. ZS performed the preliminary structural analysis and feasibility study for the wall move, and on Tuesday, August 13th CD Smith and International Chimney successfully moved the 625-ton wall, 35 feet to the east.

The Warner brothers built and opened the Warner Grand Theater in Milwaukee in 1931 and it has remained one of Milwaukee’s most treasured historic landmarks. This new project will see the transformation of the Warner Grand into the “Milwaukee Symphony Orchestra Center”. It involves renovating the 88-year-old theater, as well as the lobby and concourses, along with the building’s 12-story office tower The wall move is part of the efforts to preserve the unique and historic fabric of the east facade and also earn historic tax credits that are fundamental to the success of the project. The project is expected to be completed by September 2020, just in time for the MSO’s 2020-2021 season! 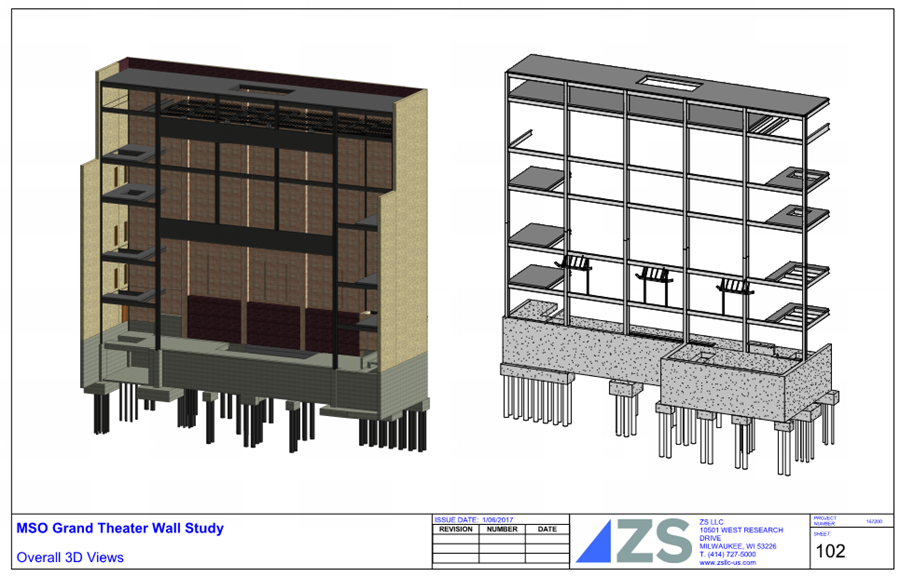 The wall move assessment, performed late in 2016, consisted of reviewing the condition of the wall, both the brick façade and the clay backup system, as well as the structural steel framing embedded in the wall. ZS built a three-dimensional Building Information Model (BIM) of the wall to help the design and construction team visualize all the steps necessary to achieve a successful wall move. Based on the assessment and modeling, our final recommendation to the design and construction team was to move forward with the final planning and design process to move the wall.

ZS is currently serving as the project’s building envelope consultant for the design team which is led by the architectural firm Kahler Slater. The project construction team is led by CD Smith Construction. 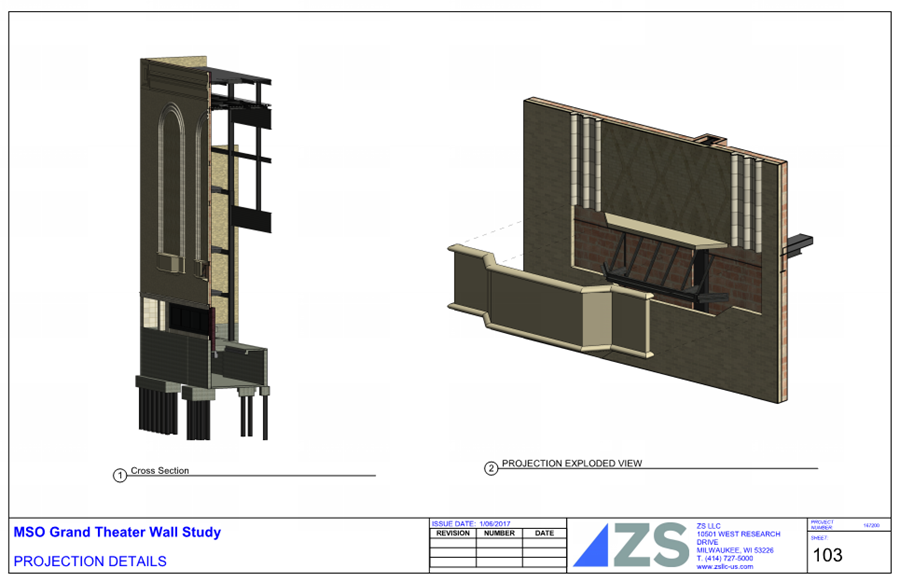 In addition to the wall move study, ZS performed a comprehensive visual and hands-on examination on all the exterior walls of the Warner Grand Theater and office tower as part of the initial phase of the restoration and revitalization. Architects and engineers from ZS photographed, measured, and tested every wall inside and outside, and on every roof in the complex to thoroughly document the construction and condition of the entire building envelope.

ZS utilized swing stages to assess hands-on the soundness of the masonry, examine the decorative stone and terra cotta, and open representative segments of the walls to verify the structure. Every window throughout the building was documented and photographed and compiled into a survey to aid in securing historic tax credits. The ZS team of in-house experts also developed repair and restoration details for every component of the various wall systems to help ensure that all work would be performed in a sound and historically sensitive manner. 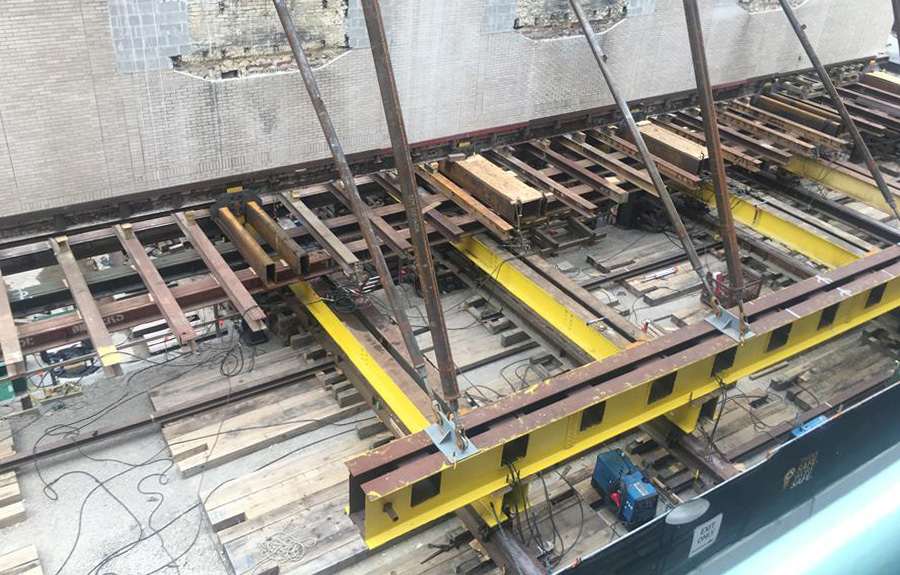 ZS experts also performed extensive environmental and thermal testing and modeling to determine the performance of the building envelope. Environmental monitors were installed at strategic locations within the buildings to gather interior environmental data over several weeks. This data was compiled and compared to the exterior weather records over the same time frame. ZS engineers made multiple visits to each building during this time to perform surveys with infrared cameras. This allowed ZS to form a complete picture of the thermal performance of the building envelope under various weather conditions.

ZS also constructed computer models of the various wall systems to simulate the thermal performance of the existing walls and various repair options. This testing and simulation allowed the architects and design team to make highly informed decisions on the most effective strategies to accomplish their design goals and maintain comfort within the buildings.

ZS is honored and excited to be part of the restoration and preservation of this historic project and we can’t wait to start attending the MSO concerts at such a remarkable facility!